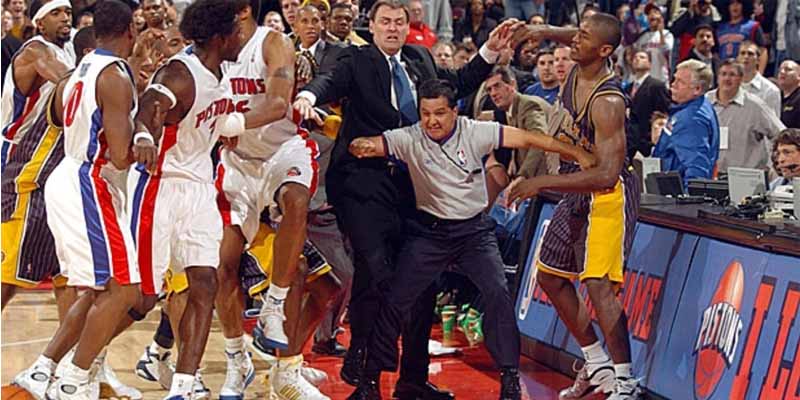 The Pistons and Pacers share this entry with Malice at the Palace, the huge fight that broke out between the two teams on November 19 2004 during a game at the Pistons home court, the Palace of Auburn Hills. The brawl started with Pacers’ Ron Artest (Metta World Peace) and Pistons’ Ben Wallace after Artest hard fouled Wallace during a layup attempt with under a minute left. The proverbial feces hit the fan after a fan threw a drink at Artest, prompting Artest and Stephen Jackson to go into the stands and attack fans in retaliation.

After the game, the NBA suspended nine players for a total of 146 games, which led to $11 million in salary being lost by the players. Five players were also charged with assault, and eventually sentenced to a year of probation and community service. Five fans also faced criminal charges and were banned from attending Pistons home games for life. The fight also led the NBA to increase security between players and fans, and to limit the sale of alcohol in games.